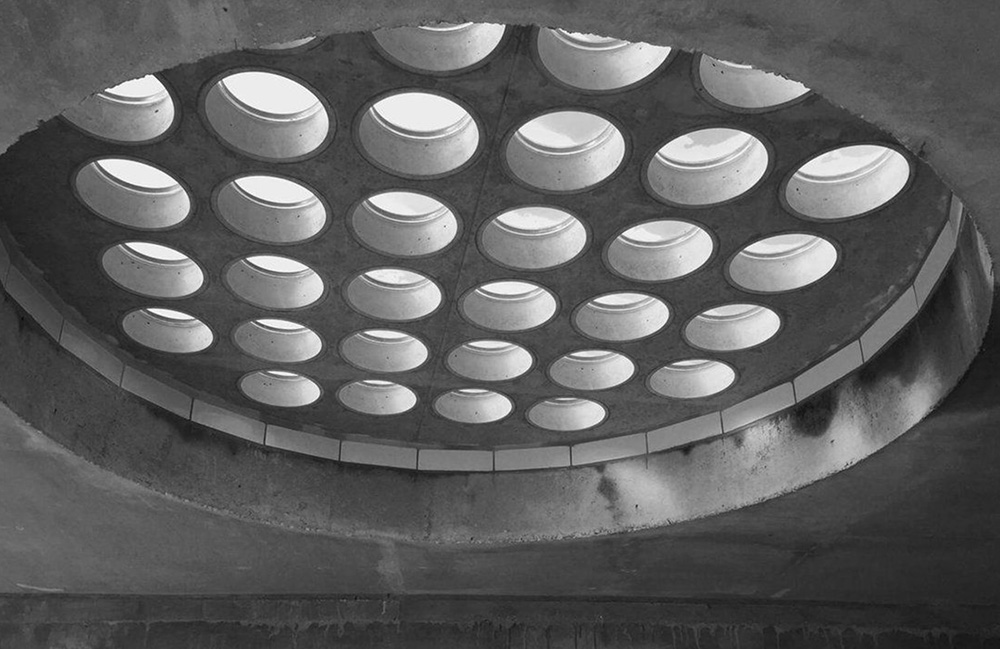 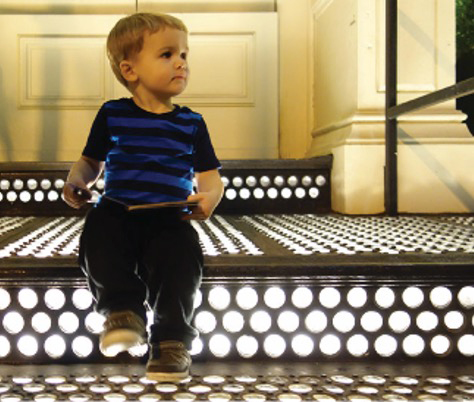 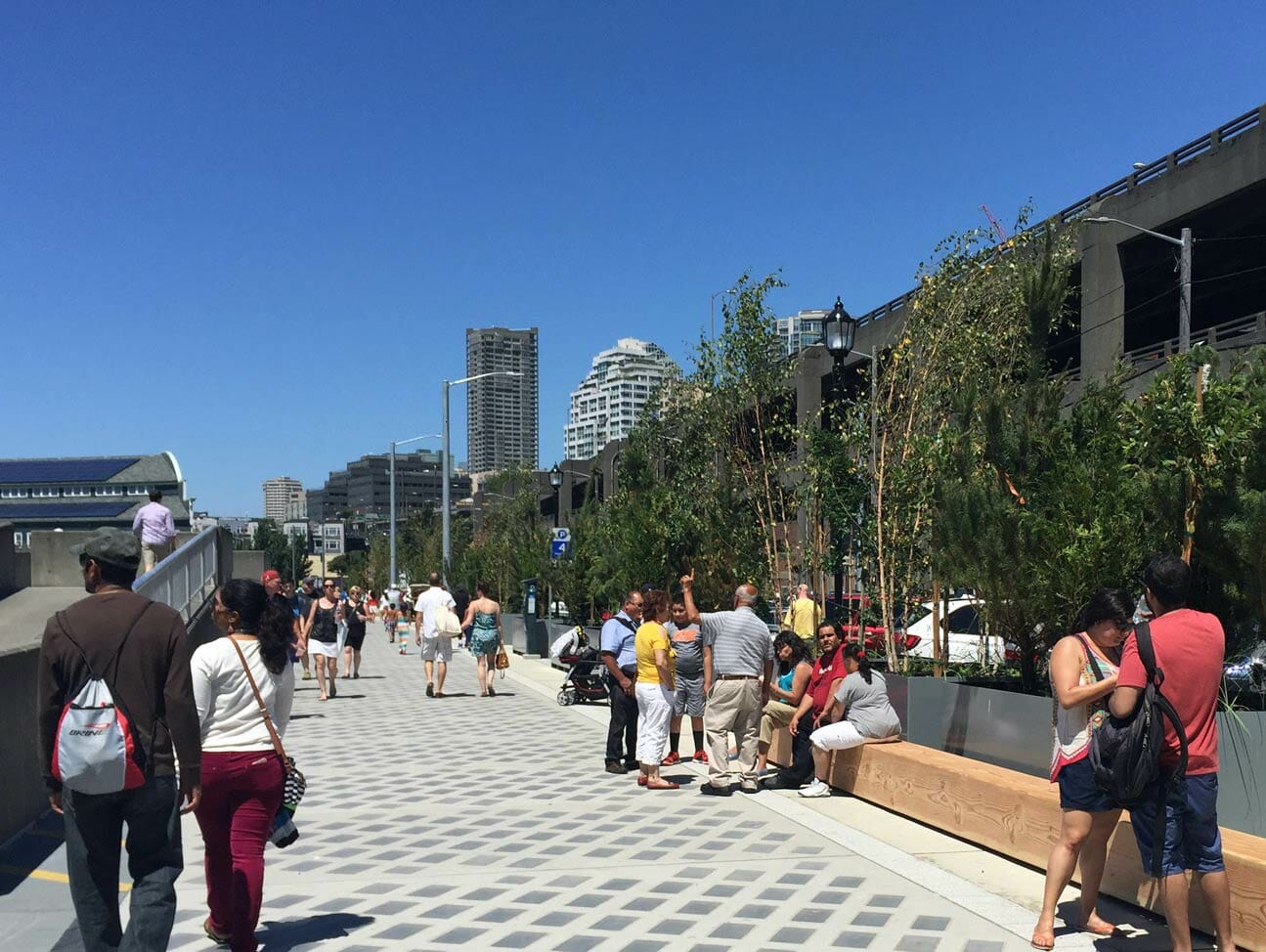 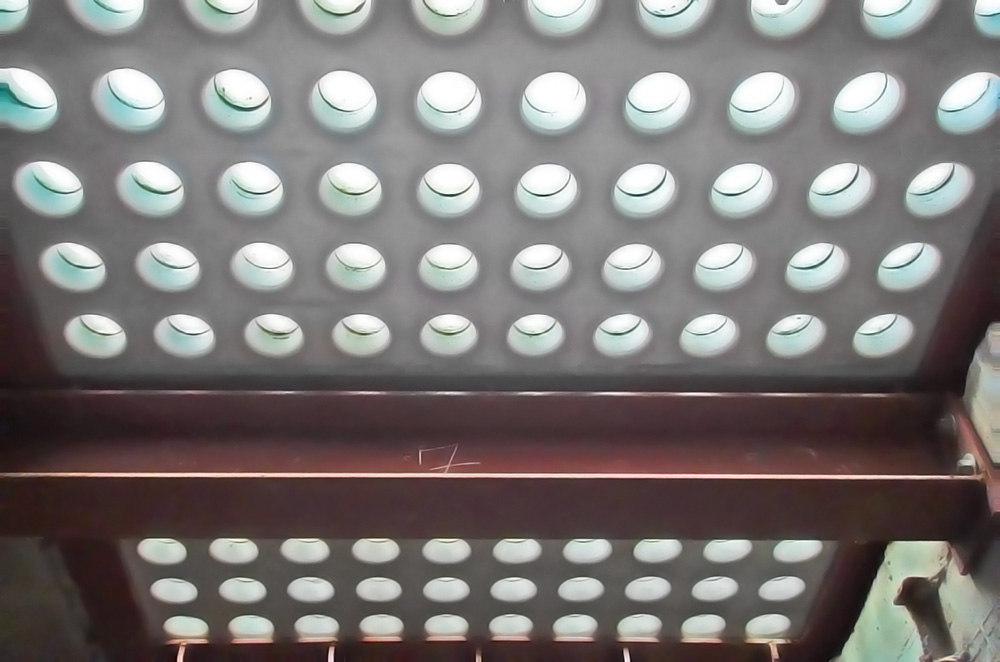 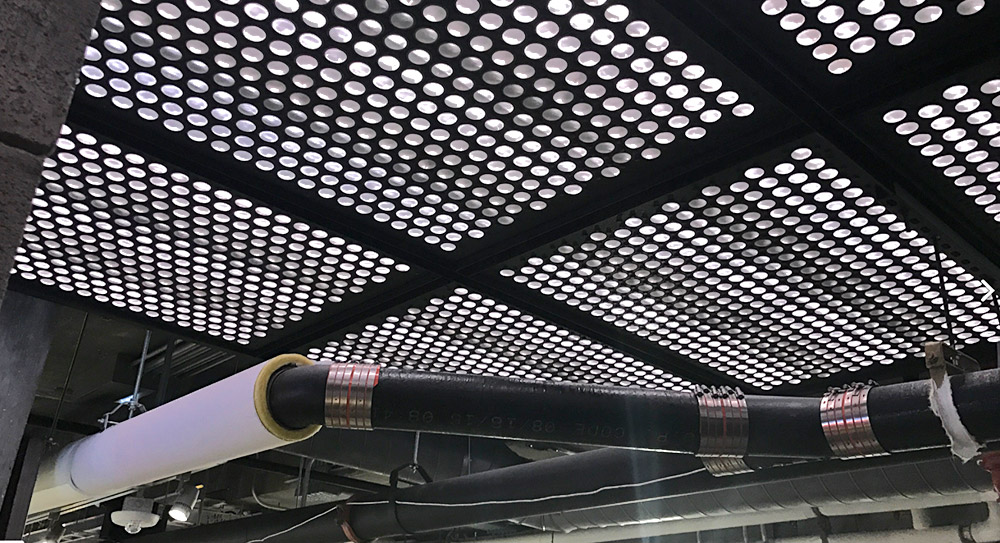 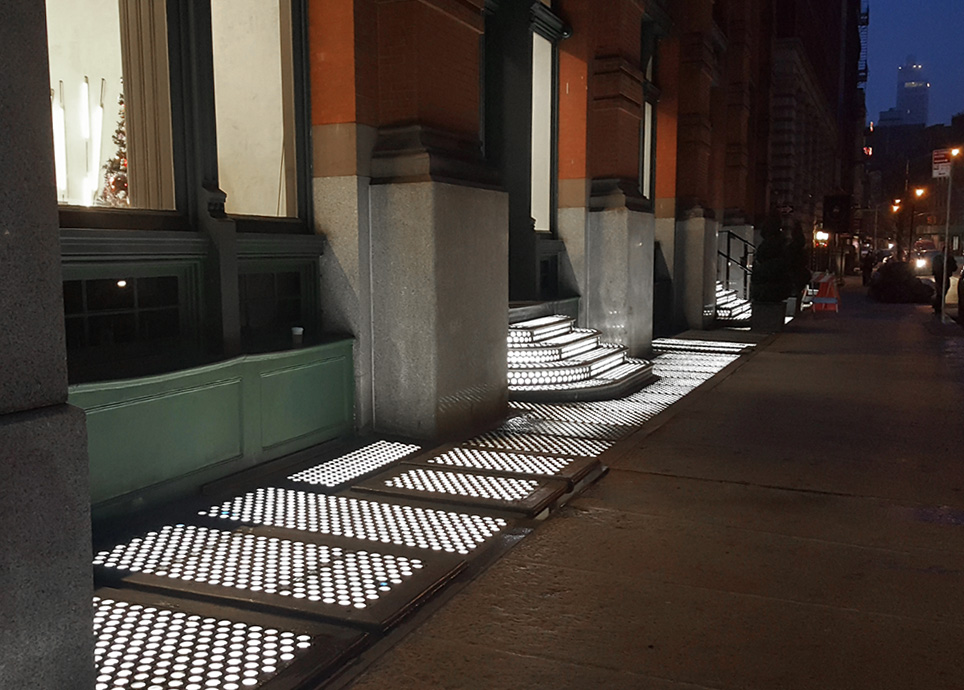 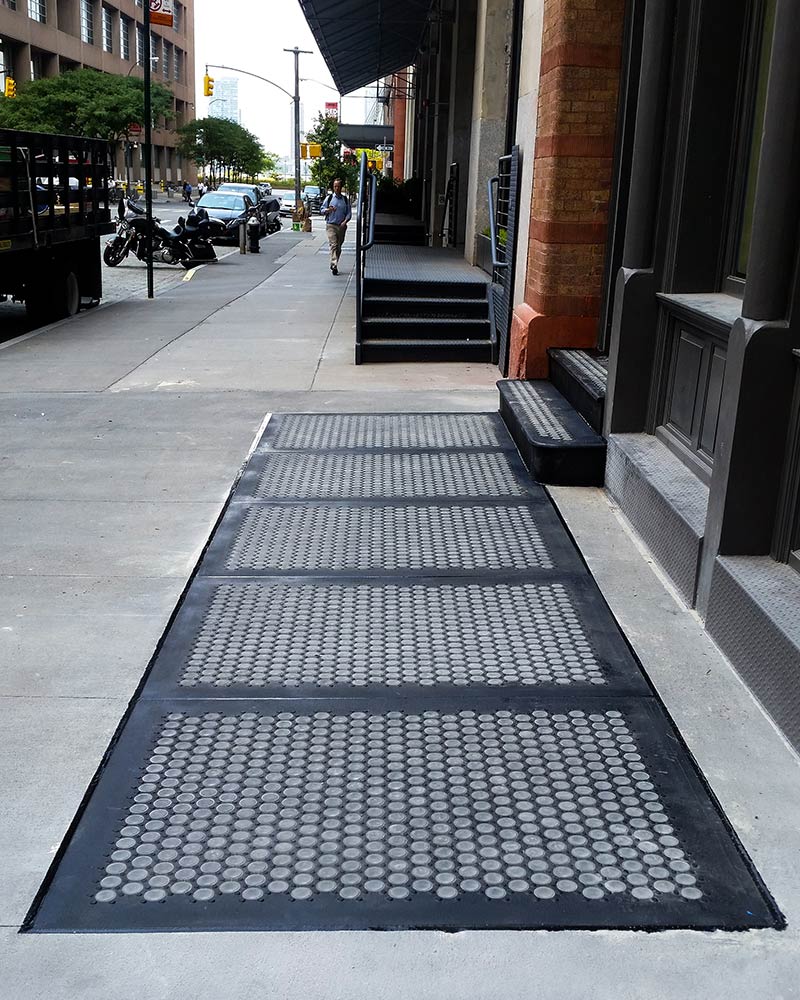 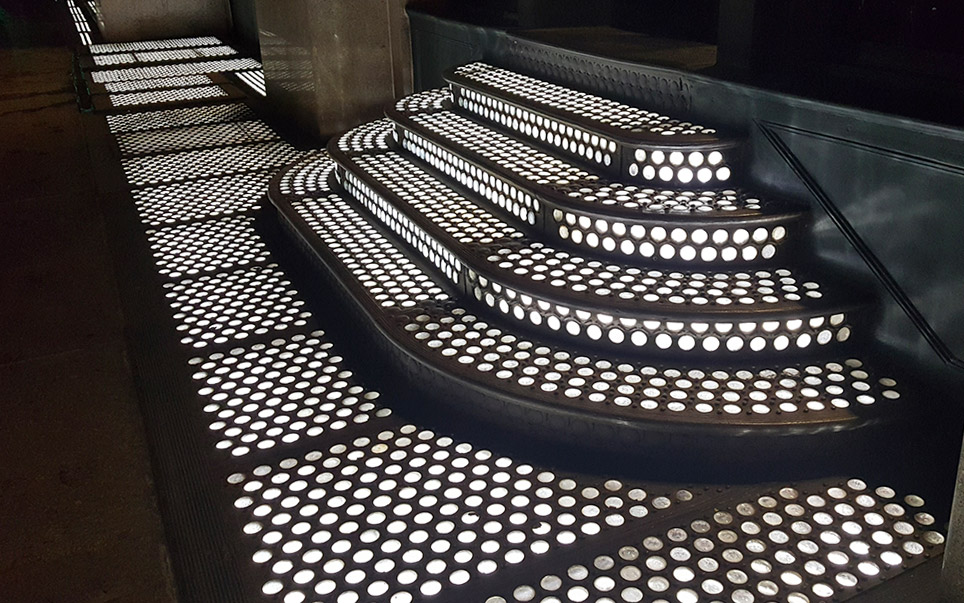 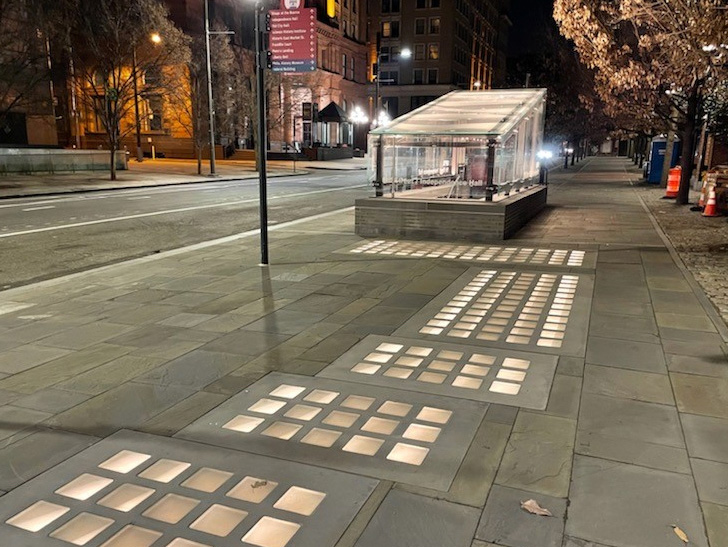 In the mid-19th century, American inventor Thaddeus Hyatt sought a way to illuminate spaces below ships’ decks—a safer way, that is, than the lanterns, torches, or other open-flame light sources that led to fires on the vessels of the pre-electric era.

Hyatt’s solution? Transparent glass prisms set into ship decks. The thick glass would be sturdy enough to bear weight while still transmitting light to the storage areas and quarters below deck. The small glass blocks—which would eventually become known as vault lights—eliminated some of the need for open flames during daylight hours, making ships that much safer.

It wasn’t long before the growing cities of Europe and North America adopted this embedded glass floor idea to illuminate urban spaces below sidewalk level—also known as sidewalk vaults. These vaults served as storage spaces, tunnels, and even apartments. Though useful, as one would expect, these spaces were windowless and exceptionally dark before the widespread adoption of electricity.

Cities installed vault lights in sidewalks from the 1860s through the 1930s to solve the problem of dark vault spaces. The glass prisms were often set into sidewalk concrete or interlocking discs of cast iron that would cover several feet of sidewalk space and illuminate the vault spaces. The top of these prisms (also known as “bullet glass”) often featured a flat surface that lay flush with the sidewalk. Other bullet glass prisms featured a slightly rounded top surface. Glassmakers often cut the lower part of each glass unit at an angle to disperse light throughout the vault space, including far, dark corners.

Visitors to many U.S., Canadian, and European cities can still see these beautiful artifacts—the glass often tinged gold or purple with age—on an occasional sidewalk.

Vault lights were a commonly used building material from the 1860s through the 1930s. They became largely obsolete with the invention of electricity, and as the materials broke down over time, many vault lights were eventually paved over. However, preservation-minded groups and individuals have sought to reclaim or replace these beautiful and functional panels. What’s more, architects, designers, and property owners are adopting new iterations of vault lights with an appreciation for their nostalgic appeal and contributions to sustainability and energy preservation.

Are you looking for a replacement for vintage vault lights or a way to add exciting ground-level illumination to a new project? With design and technology we have honed over five decades, Circle Redmont offers an array of vault light products. Architects and designers have used our vault lights in projects from sidewalks to stairs, landings, bridges, and more. We offer panels and products suitable for interior and exterior applications to illuminating and beautiful effects.

Designed for varied uses, our vault light products, even those made of cast iron, composite concrete, and steel, are light enough to be used in vertical applications or overhead as skylights or barrel vaults.

Circle Redmont custom-fabricates our composite concrete and cast iron panels to your specifications for a truly customized result. Circle Redmont invites you to reimagine how to use beautiful and contemporary vault lights.

Circle Redmont’s classic take on the vault light consists of beautiful prismatic bullet glass set in cast iron panels with a hammered and black painted finish, with or without buttons. Or, for a customized and contemporary effect, we also offer our glass bullets and cast iron vault lights in various other finishes and colors. We will happily add backlighting to our bullet glass panels for added light and impact. Our cast iron panels highlight Circle Redmont’s advanced engineering and design capabilities, withstanding live loads up to 600 lbs. while maintaining their historical appeal. We will also color the glass to order and mold round or square shapes, all of which we engineered to be slip-resistant. Circle Redmont’s cast iron vault lights are made in the United States using environmentally friendly components.

Create a glass block sidewalk with our precast concrete panels. These pavement lights from Circle Redmont are a contemporary iteration of the historic vault light: glass set in precast concrete. Concrete, trusted for centuries for its strength and performance, can withstand decades of stress and use. We offer several glass options, concrete color glazes, and finishes, including sand blast, light broom, and acid-etched. For the inset glass pavers, we offer square and round options and a range of sizes to accommodate your vision. Circle Redmont’s 50 years of engineering and design expertise have led to concrete-and-glass pavers that deliver lasting safety and reliability.

Glass Blocks in a Steel Framework

Similar to Circle Redmont’s precast concrete vault lights, our steel and glass panels descended from the 19th century innovation of sidewalk vault lights. A durable steel framework supports a selection of glass pavers to provide exceptional glass coverage and light transmission in a modular unit. Think of our glass and steel panels when you are looking for a product to double as a walking surface and skylight.

We offer these steel-framed vault lights in regular steel, stainless, or hot, dipped, and galvanized steel. Choose from several steel finishes or a powder-coated finish in your specified color. Square glass is standard, but we also offer round prisms. As with all our products, Circle Redmont rigorously tests our steel-and-glass panels. The panels tolerate live loads of 100 lbs. per square foot or greater.

Whether you wish to recapture the vintage look of glass-and-iron vault lights or if you are creating a contemporary concept, Circle Redmont offers beautiful and sustainable ways to incorporate glass panel walking surfaces into your next project.

Contact Circle Redmont today. We are eager to help you explore our many glass flooring options.

Request a Quote
Page load link
This site uses cookies. By continuing to browse the site, you are agreeing to our use of cookies. OK
Go to Top